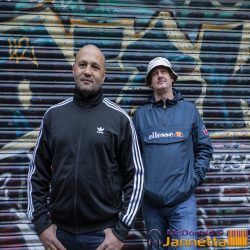 McDonald & Jannetta have been involved in the UK dance scene since the turn of the early nineties and the inception of the UK rave culture. Individually they are well respected DJ’s, Producers and musician in their own right, and began their musical collaboration in 2021 due to their unrivalled passion for music.

Angus McDonald is a DJ and producer from Bradford in the United Kingdom. He has performed all over the UK and Europe at events including Beat Herder, Ibiza Rocks Bar, Static Sessions, Royal House, Float Your Boat (Ibiza), Boombox Circus and more. He has also worked alongside Paul Bleasdale, Pianoman, K-Klass, Awesome 3, Ragga Twins, Utah Saints, Rudimental, Groove Armada, Sugarhill Gang, and his production skills have been praised by Seb Fontaine, Ian Bland (Dream Frequency/Dancing Divas) and Rob Tissera to name a few.

Paul Jannetta is a professional musician and piano/keys tutor based in Bradford. He has been playing for nearly forty years and has been a professional musician / tutor for the last eleven. He was brought up on Chicago House music from the mid 80’s and that was where he developed a love for dance music. At the ripe old age of 17 Paul wrote his first dance track which became an anthem in the North of England rave scene and also the beginning of Push Button Technology, who released the anthem “Just 4 U”. He also went on to write tracks for S-Cape and their 4 track EP #vol1 which included his tracks “Touch and Go” and “In Control”.

Joining Angus McDonald & Paul Jannetta you can usually find Bren Travis on Bass. A professional Musician & Tutor of Bass Guitar, Electric & Acoustic Guitar, Piano & Keyboards, Theory, Improvisation & Live Performance Skills who has over 20 years teaching experience. He is a master on the Bass who brings the funky groove to their tracks.

More recently the pair have released the superb ‘Out Of My Head’, featuring the vocals of Jayne Tretton on Leeds based Funkylove Records and are currently working on a Live set project that will fully immerse the musical talents of both Paul and Angus.